Unfortunately, my old 450d that I modded last summer died when I tried replacing the sensor again. Looks like some sort of electronics issue, I may have shorted something during disassembly. It is possible to get replacement parts, but it might be cheaper to get a whole used camera. And I'm not sure what's the issue anyway - replacing the mainboard didn't fix the issue.
Luckily, I've gotten a well used NEX-3 camera last November for 50 EUR. It has been sitting in my desk for three months while the cheap lenses and adapters were making their way through the mail system from China. So I've only been able to test functionality last week, and after confirming that there are no issues decided to disassemble the camera to remove the IR filter.

Unlike the previous camera I worked with, there is no step-by step guide for this model. I've found a tear-down article that was somewhat helpful, however. NEX-3 is a mirrorless camera, so in contrast with the DSLRs it has everything cramped in a much smaller space. There are a lot of screws to remove, and to get to the sensor pretty much everything other than the mount and shutter has to be removed and disassembled.
The filter stack is glued on to the glass on top of the sensor, with only a thin rubber spacer in between. It is possible to remove it fully from the unit with the PCB and shield, so I heated it up with a hair dryer and used a thin metal pry tool to remove the stack, then wiped the remaining glue with a piece of fabric. I decided to keep the black frame that was on top of the filters as an additional dust barrier, but I had to secure it in place with a piece of insulation tape.

One of the thing I read about before I went through with the procedure is that mirrorless cameras don't need any adjustments of the shims, unlike the DSLR cameras, since their auto-focus method analyzes the actual image sharpness. I had to get expensive filter replacement glass for the 450d to keep the optical path roughly the same, and make custom shims as well.
Seems like it's not exactly true. I've found this thread about not being able to focus to infinity with manual lenses after filter removal. While automatic lenses might work, manual ones can have issues if distance to the sensor is not adjusted, or a replacement glass not put in. So after removing the filters I thought hard whether to remove the shims as well, but decided to keep them. And, unsurprisingly, I ran into the same issue - when trying to focus into the distance with a manual lens, everything was still blurry.
So I disassembled the camera again, this time measuring the shims, which turned out to be 2x0.3mm and 1x0.34mm. I don't know why the article I linked at the beginning says that there are no shims in this model - maybe they had a different revision. I've removed the thinner shims entirely, and made a replacement 0.05mm shim for the remaining one out of a feeler gauge to keep the tilt. This time it became possible to focus properly, even if the marks on the lens show that it's actually somewhat past infinity. Whatever, it works.

I am yet to test it with auto-focusing lens, since I'm still waiting on an adapter to arrive. But what I got so far looks pretty nice. All the filters I used before still work. There is some noise in the photos, but that's to be expected with the filter stack removed. My old Canon had some nasty horizontal/vertical noise lines, but that might have been due to the shitty replacement sensor I used. In fact, the camera died when I put the old sensor back, so I don't know if that would have happened with the old one as well. With this Sony camera the noise is uniform, so I'm fine with it. In fact, I expected to see more of it since it's a near-decade old used device. No wonder they are considered the best sensor manufacturers in the world. 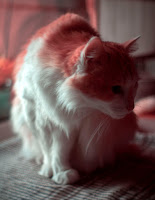 Overall, the disassembly process is harder than with a DSLR as I mentioned above, because of the cramped space inside. There is no guide online, so I wouldn't recommend this mod for first-timers. There are a lot of hinge connectors to break, flex cables to tear, small screws to misplace, and plenty of inconvenient design decisions. In order to put the camera back I had to disassemble the screen to allow the flex cable to move far enough to be attached to the mainboard while rotating the cover 180 degrees to get it back on the camera. Screen has to stay disassembled to put the back cover on as well. If you do attempt a mod like this, I would recommend sorting the screws by tear-down stage and taking a lot of photos during the process. I still have one screw left that I have no clue about where it's supposed to be in the camera.

Now I'm waiting for warmer season with more vegetation to arrive. I wish the adapter came in a few weeks earlier, before I went to the Alps to take some interesting mountain photos, but alas, postal services work in mysterious ways.
Posted by Nikita Olhovskis at 4:19 AM No comments: