Here is a copy of my final major project brief.

Project outline
The goal of this project is to design and create a realistic and aesthetically pleasing environment that can be explored by the player in first-person perspective. Level design will be suitable for multiple genres, such as action-adventure or first-person shooter. Multiple exploration paths will be available to the player.
Main focus will be on the exterior. An animated sky dome will be created.
Interactive elements, such as simple animations and sounds will be added.

Idea
The main theme of this project is combination of old art-nouveau architecture with very modern, high tech buildings.
Some years from now global warming will cause a significant rise in sea water level, leading to flooding of most modern coastal settlements. This means that a lot of historical buildings will be submerged and lost to the advancing sea.
The idea this project revolves around is preservation of a district of old buildings for historical and educational purposes. This district is converted into an open air museum, kept dry by a system of dams and pumps.

Technical specifications
Platform:
Mid to high-end PCs and current generation consoles (Xbox One, PlayStation 4).
Engine:
Unreal Engine 3 (UDK). If UE4 is released to general public considerably early in development (before the end of January), the project will most likely be moved to it.
Budgets:
Environment will be optimized for good performance on specified platforms.
Target FPS: 45
Lowest acceptable FPS: 25
Target draw calls: 2500
Highest acceptable draw calls: 4000

Reasonable amout of triangles per model will be used. A lot of attention will be paid to modularity and re-usability.
High resolution textures will be used during development, and scaled down later on during optimization stage in order to find a compromise between performance and quality. If possible, large texture sheets will be created to improve performance.

Art style
This project will be completed in a realistic style. The goal is to create a believable scene, something that can happen in real life, therefore design wise it has to be anchored to what people know and understand. This means that design of futuristic architecture and technical elements will be based on existing objects or projects that are going to be fulfilled in the near future. Materials will be created either using photographic references or recreated digitally from ground up to produce a cleaner result. Examples of old architecture will be sourced from real locations.
Old buildings will be created mainly in art-nouveau (jugendstil) style with some elements taken from of romanticism and classicism. This means a combination of geometric shapes with smooth, organic curves, a lot of façade decoration, such as statues, bas-reliefs, patterns, etc.
This will be gently blended with modern and futuristic elements – glass, shiny metal, plastic. Main focus here is on very natural combination of the two, as is done in European museums now.
Backdrops, and some elements of the playable area will feature high tech futuristic architecture. But while the goal is to create stylistic contrast, compositionally it must not cause too much of a dissonance.

This is obviously a draft, as we will be submitting our final briefs aster Christmas. At least, this is how I understood the tutors and information on Blackboard.

I've been doing a bit of research in the last couple of weeks. I've contacted DMU's architecture department, and managed to get several works of former students that are related to sustainable architecture and preservation of flooded areas. Especially interesting is a project on further preservation of Venice in conditions of further sea level rise.
Other than that Jack Greasley has pointed me towards several interesting architects that focus on the kind of futuristic architecture I would like to implement in my FMP.

I've also done a quick whitebox of the level, just to visually convey what I want to create. Naturally, not the final layout, as I will be figuring the blueprints out over the break. 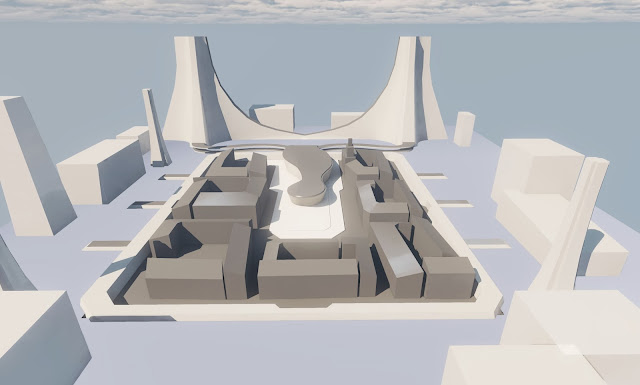 Posted by Nikita Olhovskis at 2:11 PM No comments: